What is Shopify Basic?

Shopify Basic is one of the main Shopify Pricing Plans, designed to help small merchants create their online store and manage their ecommerce business.

Using Shopify Basic Plan, merchants will be provided a Shopify Store with essential ecommerce functionality and can start selling online/offline on a small-medium scale.

Using Shopify’s Basic or higher plan, you can make an online store, customize it, and manage it from your Shopify account.

Shopify also has a built-in theme editor that you can use to customize the look of your store. Otherwise, you can access over 90 mobile-responsive themes (including 11 free Shopify Themes) from the Shopify Theme Store.

The blogging engine built into your online store allows you to post articles, inform customers about events and promotions, and receive comments/feedback.

Two staff accounts can be added to the Basic Shopify plan.

How much does Shopify Basic Plan cost?

The Shopify Basic plan costs $39 per month (in the United States - the pricing can be different between regions). Starting from November of 2022, Shopify even offers 1$ per month for the first three months with Shopify Basic.

Moreover, you can use the 3-day Shopify Free Trial to experience this plan and test if the Basic Shopify Plan is suitable for your online store.

The only fees will be the credit card rate which is included and varies based on your Shopify plans:

Shopify will only charge 2.9% + 30¢ per transaction with the Shopify Basic Plan. You don’t need to pay any other fees from your payment gateway providers.

Shopify Payments will also waive the 2% transaction fees Shopify would otherwise charge on each sale.

However, there will be a 1% additional transaction fee for purchases made by credit card issued outside the United States. Step 5: Click on Compare Pricing Plans (or similar section in your language of choice) to view transaction fees for your store location.

Your Shopify store will begin with a domain like “nameofyourstore.myshopify.com” - thus, it will be fully functional.

You can transfer your domain to another registrar even if you leave Shopify.

The Shopify Basic Plan (and all of the Shopify Plans) does not include email hosting (while web hosting is included on almost every plan), so you must install apps to send emails from your store’s domain.

The cost of Shopify Apps is separated from the Shopify Basic Plan. Therefore, consider the use cases you have for your business to decide which apps you should install.

Note: According to Shopify research, an average merchant installs six Shopify Apps with a subscription cost of $19.

Unfortunately, Shopify Themes are not included in the Shopify Basic Plan (or other Shopify Plans). However, many free and premium options are available inside and outside Shopify.

The cost for Shopify Themes might vary between $0 to $350 as a one-time purchase.

Shopify POS Lite is free on the Shopify Basic Plan, while Shopify POS Pro will cost 89$ per store location.

You should expect these costs for using Shopify POS on your store:

The initial investment for Shopify POS hardware may differ for each merchant, and this estimation might only be accurate for some. To give you an idea of the minimum Shopify POS spending, we have selected the cheapest option for each type of hardware. What is the difference between Shopify Basic Plan and Shopify Starter Plan?

The Shopify Starter Plan is eight times cheaper than the Shopify Basic Plan, but the transaction fee is almost twice as much. 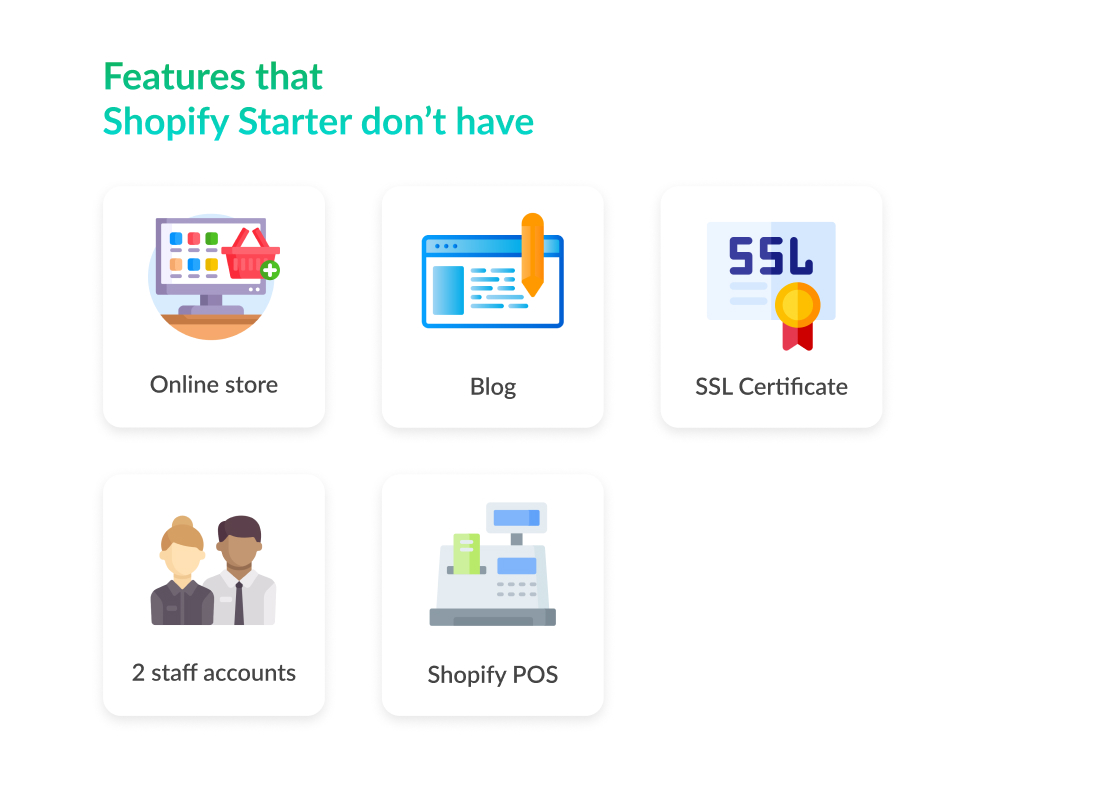 Furthermore, you won’t be able to have the following features if you use Shopify Starter Plan:

Speaking of driving traffic, Shopify Basic offers the whole package for an ecommerce store wherever your traffic comes from. Meanwhile, Shopify Starter is feature-wise for organic visitors from your social media platforms.

You can still run ads and do SEO to drive traffic to your Shopify Starter Linkpop profile, but they would not be optimized and often perform much worse than having your own existing website on the Shopify Basic Plan. Shopify Starter could be a bargain, depending on your business size and model. In most cases, you’ll eventually want to upgrade to another Shopify plan when your business expands.

Moreover, even if you use Shopify Payments with the Shopify Starter Plan, the 5% transaction fee is still painful and cuts deep into your profit margin when you scale up.

What is the difference between Shopify Basic Plan and Shopify Plan? The Shopify Basic Plan is three times cheaper as the Shopify Plan while having 0.3% higher transaction fees.

Besides more advanced reports and staff accounts, the feature that makes Shopify Plan outshine the Shopify Basic Plan is Shopify Flow. With Shopify Flow, you can automate your repetitive tasks and save thousands of work hours annually.

Shopify Basic Plan can be more favorable if you are new to Shopify and still trying to explore this ecommerce platform.

Who should use Shopify Basic Plan?

The Shopify Basic plan is recommended for merchants who are exploring the ecommerce field. This Basic Shopify option provides the essential features that you can use for many business models, whether it is drop shipping, print-on-demand, services, or retail.

More importantly, with Shopify Basic, you will be able to activate almost all of the sales channels, making your ecommerce business ready to integrate with many social media platforms, other ecommerce platforms, and search engines.

Merchants whose sales volume is not high

The Shopify Basic Plan transaction fee is 2.9%, which is a considerable amount for your cost structure if you have significant sales volume.

While it is recommended for merchants to use Shopify Payments to avoid credit card processing fees, you should consider upgrading to higher Shopify pricing plans to lower your Shopify transaction fees.

What are other Shopify Pricing Plans besides the Shopify Basic Plan?

Do I get free hosting when I use the Shopify Basic Plan?

How much does Shopify charge for the bandwidth with the Shopify Basic Plan?

The Shopify plans all include unlimited bandwidth for free.

Can I use my own domain name with the Shopify Basic Plan?

You can purchase a domain name within Shopify or use an existing one that you own.

When you sign up with Shopify, you will receive a free domain name myshopify.com that will remain yours forever.